Many distributed applications require reliable and scalable implementation of membership protocol. Membership protocol provides each process (“member”) of the group with a locally-maintained list of other non-faulty processes in the group. The protocol ensures that the membership list is updated with changes resulting from new members joining the group, or dropping out either voluntarily or through a failure. The SWIM (Scalable Weakly-consistent Infection-style Process Group Membership Protocol) is motivated by unscalability of traditional heart-beating protocols, which either impose network loads that grow quadratically with group size, or compromise response times or false positive frequency of failure detection. It is aiming to implement a membership protocol that provides stable failure detection time, stable rate of false positives and low message load per group member, thus allowing distributed applications that use it to scale well.

Applications which rely on reliability and scalability of the distributed membership maintenance protocol:

Requirements to protocol:
Heartbeating-based protocol do not fit well under such requirements since it suffers from scalability limitations. The unscalability of the popular class of all-to-all heartbeating protocols arises from the implicit decision to join two principal functions of the membership problem:

Properties of SWIM protocol:
While 1-2 are properties of the used failure detection protocol, 3-5 represents properties introduced in membership protocol.

Quality of service properties of failure detection:
It is proved that strong completeness and strong accuracy is impossible to achieve at the same time over asynchronous unreliable network. However, since a typical distributed application relies on Strong Completeness (in order to maintain up to date information in dynamic groups), most failure detectors, including heartbeating-based solutions, guarantee this property while attempting to maintain a low rate of false positives. SWIM takes the same approach. 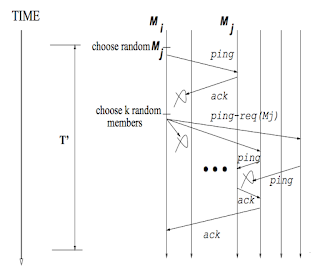 Basic implementation of Membership Dissemination component consist of:
In order for a new member to join the group it can use one of the following approaches:

The basic implementation described above shows the general idea of the protocol, but in order to make protocol robust and fault tolerant following improvements may be applied:

SWIM can be extended to a Wide-area network (WAN) or a virtual private network (VPN), by weighing ping target choices with topological information, thus reducing bandwidth usage on core network elements inside the network.

Consul is a distributed, highly available, and datacenter-aware service discovery and configuration management system. It uses SWIM as a basis for implementing Gossip Protocol and for managing membership information.

ScaleCube (disclaimer: I am one of the authors) is an open source microservices framework for a rapid development of a distributed, resilient, reactive applications that scales. It uses a variant of SWIM protocol implementation in Java and uses it as a basis for managing the cluster of connected microservices. It uses suspicion mechanism over the failure detector events and also separate membership updates dissemination component. But it introduces separate Gossip Protocol component instead of piggybacking membership updates on top of failure detector messages. It is done in order to reuse gossip component for other platform events and have more fine grained control over time intervals used for gossiping and failure detection pinging. New members to the cluster joins via the configuration provided seed members addresses (it is an analogous of well known servers described above). And also it extends SWIM protocol with the introduction of periodic SYNC messages in order to improve recovery from network partitioning and message losses.